Well after a 3 month break it was great to be back in the hot seat again with Paul Crosby in his Left hand drive Porsche 911 in the HERO CRA Summer Trial.

Perhaps not having the intensity of the Rally of the Tests but there was enough to keep all the beginners, novices and experts on their toes with the huge road book denoting all the hundreds possibly thousands of junctions  that we would traverse in the next two days.

But before all that the little 2 hour round the houses Friday prologue. It all counts and with the likes of Tullie, Taylor, Johnson’s plus a few surprise packages like the father and daughter crew of Guy & Claire Woodcock, every second was going to count.

So first test was a bit of a warm up get that finely tuned communication and even with some problems and cones G and H being a little tighter than expected it’s always nice when the stop marshal says: ‘Oh, well-done fastest so far.’

The first regularity went pretty well and it was nice to get back into the flow of things, first impressions of the Porsche were great no rolling very steadfast on the road very responsive and great at low and slightly higher speeds and the cockpit is probably the biggest I’ve been in for a while!

A feature of the event has to be how well the PR crews did as every town and village or hamlet we passed through there were dozens of householders lining the route waving and cheering from the young to the old and watching their faces as we went by was definitely one  of the highlights!

The second regularity I was getting used to the presentation of the road book and made some stuff up in my mind so a few wrong slots were made but nothing too serious and we headed back for the evening meal – We managed to avoid most of the tractors and traffic that had hindered others.

So we ended the day with nothing major but instead of getting 5s and 8s I wanted to get down to 1s and 0s. 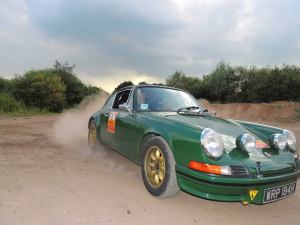 Round the island test for the 3rd time and then onto the 1st regularity of the day and are first dealings on a long way round triangle with a car that didn’t quite understand the vagaries of rallying trying to point us in a different direction ‘no thanks’ we know where we’re going! Then we meet tractor but luckily at a point wide enough for three cars however the person in front didn’t figure the gap wide enough for a bus wasn’t big enough for her oh and guess what yep round the corner the tale tell signs of marshals and a control board – 18 seconds lost darn it… but nothing we could do but get even better.

The next couple went really well and I find the art to good regularity is doing your own thing not getting hassled or put off with other competitors but as we – somehow – missed the traffic you could tell others weren’t so lucky and by the time we went into the coffee break we were mixing it with car 7 and a few others struggling to keep in the train of cars.

So there was a bit of a wait to start the next reg as a queue of cars decided who and what minute they needed and so when we got near the end of the reg we’d caught a few of them but luckily they were good enough to spot and pull over pretty quickly so not causing us any major time loss.

The afternoon would see some spectacular scenery and me boring Paul with my road rally and endurance rally tales we headed to one of my all time favourites up the Elan Valley where we were photographed with a group of around 6 Atom Kit cars and lots of sightseers getting their first glimpse as a convoy of cars made their way to Abercwysm – but before that a test and short 2 mile regularity on the private land at the motor sport centre where brain fade and traffic again cost us dear, losing around 30 seconds in 5 minutes – more than we had in the previous 6 hours 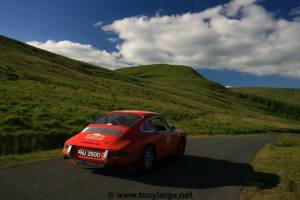 (b.)With more than 50m visibility, yeah getting a close look at the drops, and steepness that was never really appreciated in the dark.

(c.)  And how big those drops really are.

As we started heading south and back to the hotel the hot weather was having an effect on crew and machinery with plenty of fluid top ups need and a little bit of sun cream for those in the open top pre-war vehicles with Ryan Pickering doing a great impression of a ‘beetroot’.

But at the end of the day we were in 6th place but only 15 seconds separating us from 3rd so still a lot to play for.

Not a long day hopefully home for mid afternoon but there was bound to be a sting in the tail wasn’t there?

Well the visitors and Sunday drivers were out on force along with the Antiques Road show meaning a trip to Asda not to get a bottle of milk but for a last minute dot com test – so thanks to the manager to allow to use his car park before the Sunday rush.

A re-route was needed due to a nearby cycle race which saw us again mixing with a few of the novice crews but it made for a spectacular sight as a convoy of 13 car headed but the pre-war vehicles then a mix of Bristol’s, Mini’s, a BMW 1602 and Porsche’s it certainly had everyone else looking and waving at us.

Landow was next for the coffee halt but not before 3 tests which we got zero penalties on two of them. and Paul was able to exploit the power of the Porsche round the track flinging it from side to side. Oh that was good apart from a line penalty – darn it.

But then on the next regularity we had some instructions where you were only supposed to turn down if it was shaded so just to be different I sent Paul on a half mile detour and when we came back onto the route, we came out behind Guy & Claire Woodcock but after they let us by it was a good couple of miles before the next control and we made it on time – we were lucky! 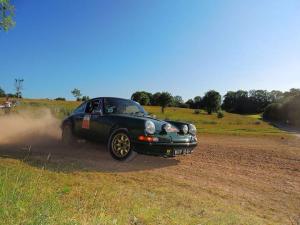 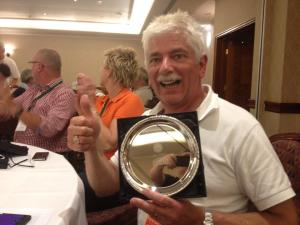 The final regularity around the forest drive at Cwmcarn with the cyclists, walkers and people having picnics in the hot weather my arm now aching from the arm waving!

Set at 14 miles per hour is was just a bimble and a chance for the public to overtake us as the drive was open to everyone – I think at one point even a 7-year old on his push bike managed to get ahead.

Back at the finish a chance to catch-up with the – what ifs, maybes’ and should have happened before the results and 4th overall 3 seconds behind Guy & Claire in 3rd who had a great run in the Escort, but we did get 1st in class.

Thanks to all the organisers, marshals and rest halts for the 2014 Summer Trial.

But an even bigger thank you to Paul Crosby for letting me compete in a Porsche another dream achieved! 6R4 next….