48 seconds… That’s the advantage going into the final day! Yeah too right we were nervous.

A nice jogularity to start with – running slightly ahead again just in case we got caught up in any traffic. A nice zero and a one after seeing a special sign to Brecon up through a farmyard with a steep hill, no worries.

A few simple tests on Epynt one cut slightly short – a good decision – after the heavy overnight rain.

Then my favourite deeliarity… our downfall the day before and guess what our downfall yet again getting mixed up with a silver Renault Clio as we crossed the main road sent us into a dither and we got carried away and went on the instruction rather than the mileage – ONE minute dropped… urgh!

We must have lost it by now…

A quick conflab with Paul Bosdet – the second place navigator – we reckoned on a second separating us.

We were planning a big push on Caerwent, a venue I knew fairly well but it had been a while and to be honest you can come up with a myriad of routes.

Pushed we did dropping a minute early on but then we hit everything and as we rounded the final hairpin I shouted 46 and we screeched to a halt and the marshal gave us our minute – a cracking run!

We continued and had a wicked test on the infield of Chepstow Park racecourse flat out round the bottom corner onto the gravel it was fast and bouncy but felt good as we headed into lunch. 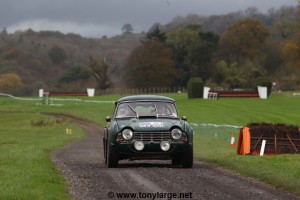 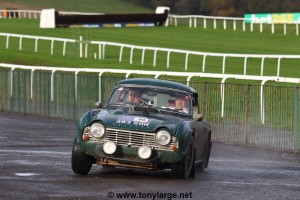 Not that I could eat but one think we did find was a continual swig of the water bottle and the occasional Picnic bar was definitely needed to keep up the energy levels and concentration so eat I did, but I could not work out what times to book out and wasn’t much of a conversationalist but Paul did say he had dropped 20 seconds on the previously regularity – Reg 3/3 that caused so much pre-event consternation  due to the length of green road we were allowed to use and nearly caused me a heart attack as we reached the end but missing a time control and then seeing the marshals as we reached the final 20 yards popping out of the undergrowth.

The afternoon didn’t start well – Ryan talked through the final test but as we went through box B the car continued round to the right: “No. No. No” I shouted, “Other way”. Ryan quickly spun round but we knew we would not win fastest in class on that one so at least 3 seconds lost.

I’m rambling just as I did to Ryan as we entered the final regularity, not sure what happened but we survived with a 3 & 4, 7 in total. It was great that some of the travelling marshals smiled and words of encouragement and the guys on the final control were full of praise and congratulations – I dare not smile we had the final fling and three tests at Caerwent to do yet!

I wouldn’t say they went smoothly as the tape was down at one point as I said slot 90 left and looked up to see us turning round as we had overshot the junction. But we finished and now it was just the M4/M32 we had to negotiate and the horrible Bristol inner city roads to make the final time control. 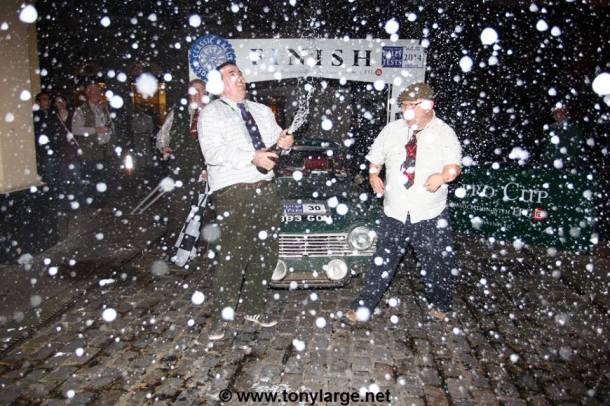 We tried doing the maths in our head – Ryan was calculating it out load but I said: “Whatever will be, will be”. As we didn’t have the result of the final reg – I reckoned we had done it by 5ish seconds.

In Bristol we were given warm applause but I must admit this was all a bit of a blur, as we headed under the archway Clerk of the Course Guy Woodcock said: “Congrats, we think you’ve done it”. So we were allowed to spray the Carver, but it was down to marshal check sheets and if there were any cone penalties to be applied an anxious wait.

I was supping a pint when we had an inkling – then as we made our way to the notice board the number of people congratulating us we knew we had done it, crowned winners of one of Europe’s toughest rallies in our trusty TR4!

To see the break down of results please CLICK HERE