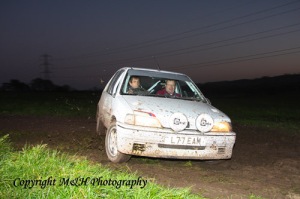 Started in Devon joining up with my driver for the 2 hour drive to scrutineering, noise and then a lie down in a darkened Costa Coffee planning the day ahead.

Then cuddle followed cuddle – you see it had been a while since I was with the Endurance Rallying family, I’d retired due to doing too many events – otherwise known as old age and I need my pipe and slippers…

Great welcomes from the Field’s (could luck on the narrow boat) and the Robinson’s 😉 and the Turners! Why had I ever left….

Welcome back as we pulled into the finish control of the first selectif on the 2013 Great Bustard 26 minutes of pure fun in a road going car past the Pyramid stage and through the fields normally covered in tents – Worthy Farm near Glastonbury was the start of a great 26 hour adventure!

We thought we’d done alright – apart from a dry mouth – a junction/call every quarter of a mile or less! But only 12th fastest and my driver Wattsie already had a bottle of Lucozade.

Clobbering the gatepost on the next ‘don’t take any risks on this short test’, meant a broken window and a dented door. It felt as if it was freezing and it was only 2 in the afternoon, it was going to be a cold evening.

The next few tests were slippy with plenty of ‘special mud’coming through the window summed up by the lady at the first petrol halt; ‘Have you been rallying.’ Then as she gets closer to the car, ‘Wow, you’ve been in cow sh1t.’ And promptly walks away. Nice….

Back to Worthy, Wake (other way) and somewhere and somewhere else on Map 183. Then some smart person says ‘you realise your only a quarter of the way through the event!.’

‘No but thanks…’ was the curt reply

We’d already seen a few retirements where we next… the early ‘clobbering’ had meant a bent something as the steering wheel was at a different angle to when we started.

But a rest halt at last and a chance for a spot of tea with pudding and for Wattsie to see what he could and when I returned the car was in fine fettle with polythene meaning we could get a bit or warmth and a bit more of an attack.

Well one out of two wasn’t bad as we tackled some more selectifs in the grounds of Longleat pretty rough and one which even made me speechless after literally taking the wind out of my sails and making me useless as a navigator as I couldn’t speak and could only revert to some very dubious hand signals.

So on to the night leg – Jogularity to start with plotted on the map a total of 26 seconds lost not bad seeing as I didn’t have a trip meter, 24 seconds on the last IRTC after looking far to long for the slot across the lay by.

My mood not helped by missing the slot off the A303 for Mere and Zeals having one of those navigator moments! So a bit of a panic and arriving at the next control out of order and pushing in as far up the line as possible.

Then back into the forests around King Alfreds Tower the first 3 controls cleaned – Then we caught the car in front and tried working out where we were going leap frogging each other at regular intervals at least we were getting right approaches including a few long way round triangles!

It all went to pot on the next forest used earlier as a selectif I had the right road but then convinced myself we had gone the right way but then turned back to turn back and back again, a frustrating  5 minutes lost – darn it!

Out of there and into proper regularity – did I mention we didn’t have a trip – lost heaps of time but managed to get the controls and right approaches others either completely missing controls or going horribly wrong.

To find out more about Endurance Rallying Go HERE

So a good run into Worthy and dropping time but keeping on a par until a disaster of a tulip which didn’t make sense but neither did anything else due to a wide are – but we retraced our steps and eventually found it but again with minutes lost! Then back into the lanes overtaking a few, yippy a chance to break free and unleash the shackles! Bit of left, hairpins and slots that looked exactly as map – a rare treat on this well organised and prepared rally.

Overtake a few more cars one departing from a control the wrong way – Gutted to see a fellow South Hams Motor Club member Liam Burns standing on the side of the road he been on for a top 3 finish and better until the bumpy subsided road got the better of them and meant they had to be rescued by a friendly farmer meaning they could still finish the rally and score some points.

Back into Worthy – for the last time and we were on it pretty much on it like sonic… giving it all we had to keep on time including the tricky slot out of the farm and back onto the public road – But the final sting in the tail was still to come.

Luckily, another event called the Rally of the Tests had used it some 2-years previous… a tricky little slot into a farm yard or was it someones drive way – it worked as we rounded the corner to find the marshals another competitor was approaching from the wrong direction – not the first and definitely not the last.

And finally the finish, cliche time – a real test of endurance for the car and crew!

Marshals: A sterling effort in the circumstances – in freezing conditions, hands-shaking, but in high spirits and hope you appreciated my joyous ‘I Love You’s,’ as I left controls – it was meant.

To the organisers: Thanks I think, a range of emotions, tiredness and and a true test.

Right I’m booked in at the Chiropractors to sort out my aches and pains.