Cliff England in Ypres after scrutineering

When you hear place names like Ypres (Ieper), Hollebeke, Poperinge, Zonnebeke, Kemmel & Watou they can invoke memories of huge sacrifice made by thousands who lost their lives during the Great War of 1914-1918. The fields littered with Poppies, cemeteries and graveyards kept to exemplary standards to this day almost 100-years later.

Ieper main square at 6 in the morning

Nowadays those place names are synonymous with stages run on the Geko Ypres Westhoek Rally, any chance you get to travel over these stages has to be done and so along came the Poppy Rally a regularity rally for cars pre-81 – My ride for the weekend, a Triumph 2000 driven by Cliff England.

The majority of the 300 kilometre rally would take place within a 20-mile radius of Ypres and yet somehow the organisers had devised a route that meant only a handful of the quality roads would be used twice.

It’s been a while since I’ve been used to the accuracy of regularity being at a certain point and at a certain time measured to the second, so losing 27 seconds on the first intermediate control wasn’t the best start! But it was the first time of many that we would see the same familiar faces time after time marshalling in the bitterly cold and biting wind that swept over the relatively flat landscape.

For us and the majority running in the late teens/twenties on the road hitting our mark and being with single figures is a bonus while the top crews are looking to be 3 seconds or under. It’s a juggling act looking at speed table, keeping on the right route and looking at the time, sometimes it works and other times at least one of the above goes out the window.

Found this video of some Escort action around the main square in Watou:

The second regularity was a point in question 2 timing points relatively close but when you haven’t seen anyone for 30 minutes you do start to question and wonder if all the plotting until 1 in the morning was such a good idea!

By tea-time after 4 tests on closed roads and 2 more regularities we started looking at the night leg a maze of roads crossing a maze of canals interspersed with the difficult road layouts plenty of junctions and passage controls a total of 8 minutes dropped! The second half was in more familiar territory around West Outer including an interesting road that had a no entry sign so a quick reverse change of plan and a secret check to boot.

Thanks to Tony Large for the use of his photographs: tonylarge.net 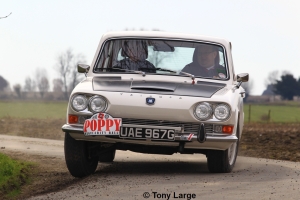 Thanks to Tony Large for use of picture

The Early Bird regularity is exactly that a Sunday Belgium is sleepy, very sleepy and we didn’t want to waste time waiting for breakfast so at 6:30am after 4 hours sleep we were out on the roads again a few obviously hadn’t woken up a few in ditches and a few getting lost meant plenty of 3 or 4 car trains wending their way – Even though the sight of Bob Rutherford for the umpteenth time was enough to put anyone off their impending breakfast.

8 tests on closed roads the maximum being 5km’s long a chance to open up the Triumph then one of the best test round a speedway or stock car track which was banked and on tarmac! It was brill…

The sting in tail proved to be the last 2 regs I will never have a go at the accuracy of OS maps after the ones we had – You have to look at for 2 minute black lines on the side of roads denoting tunnels the normally go under motorways very narrow and with timing points just after them with a few speed changes thrown in for good measure! Then on the run in even more of a sting with a secret check literally in the middle of no-where just as you were relaxing and thinking of the bar and bed.

20th overall and 2nd in class can’t be bad! A few lost minutes here and there and every time we made a wrong slot and turned round we would unfortunately meet a silver Porsche coming the other way and show him the slots but heh ho that’s rallying…

Still recovering 24 hours after arriving back home so sorry if this doesn’t read right but hopefully this will give you a very brief over view of what has to be of the best fun, tricky and best social events I have ever done.